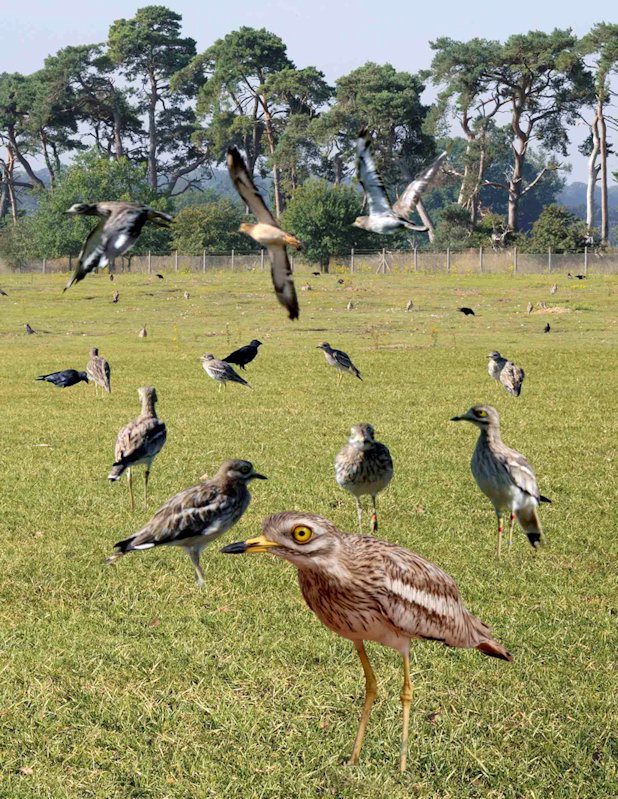 No I’m not looking in the mirror – but thinking about a rather strange bird that fits the above description rather well. Not only that but it is a very rare species in this country, nesting in only a very few places, one of them being on Salisbury Plain. That being so, I have actually never seen this bird in Wiltshire, but only in its other stronghold of Norfolk!

It is of course Burhinus oedicnemus, better known to us as the Stone Curlew. With regard to its rarity, only 254 pairs were recorded as nesting in Britain in the year 2000, 172 pairs in the Norfolk Breckland, 71 pairs in our part of the country, and only 11 outside these two areas. Despite previous declines this had increased by 2013 to about 350 pairs in total, no doubt due to conservation efforts in its nesting areas.

Stone Curlews are members of a family commonly known as Thick-knees, comprising ten species that range around the world from South America to Africa, Asia and Australasia. Our particular Stone Curlew is one of five sub-species which occur throughout Europe, North Africa and south western Asia and is a summer visitor to the UK, returning to Africa in winter.

This ID composite picture (Richard Crossley/Wikimedia Commons) shows Stone Curlews imaged in their typically sandy East Anglian haunts – the habitat that they really like consists of bare, stony ground with patches of short grass, where they nest right out in the open space protected by their cryptic plumage and they crouch down absolutely motionless when any danger threatens. Their invertebrate prey is most active by night which means that they are generally nocturnal, which accounts for the very large eyes that are such a prominent feature of this bird. As a result they are not at all easy to see during the day.

Very similar chalk based landscapes are available on Salisbury Plain and the species is a regular nester at the RSPB Winterbourne Downs reserve near Newton Tony and at other sites on the Plain as well.

As to thick knees, well, the curious anatomy of birds means that their real knees, (the joint between the femur and tibia) are out of sight close to the body beneath their feathers. What you might think is a knee hinges in the wrong direction and equates to our ankle joint; the long bone below it is actually part of the foot, known as the tibiotarsus, which has the toes at the end. Just one of those little things that makes birds so different, and so fascinating. Note to self: this year I really must see a Stone Curlew in Wiltshire