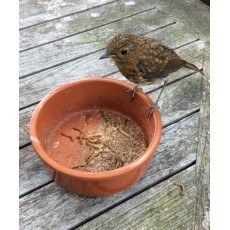 It is a case of finishing what one has started – once you start feeding the birds, especially with live food during the breeding season, they come to rely on it and so it must continue come what may. Our patio has become a magnet for young birds of several species this year and it is well worth the expense! I have mentioned our “tame” robins many times in recent years, and this year will be no exception to that. The robin pair has had at least two nests, and given the long gap between them, and the disappearance of the female from the first one, there may have been an unsuccessful attempt culminating in the loss of both nest and female robin earlier in the summer. Anyway the male quickly found a new mate and eventually they brought four fledglings to the garden.  One vanished fairly soon after but the other three began the regular habit of waiting outside the back door for the offerings of live mealworms. Gradually of them two dispersed, leaving what has become a most unusual juvenile robin, one that will not go away!

Most mornings when I come downstairs there are birds waiting about the patio for their free handout.  Today it was the juvenile robin, the male adult, two juvenile blackbirds and a starling (just for a change only the one!) hanging around hopefully. Usually the adult robins will drive off their young when the time is appropriate, but this baby just refuses to go.  At the end of July sudden hot spell resulted in both the adults going into a vigorous moult, both losing their complete tails on the same day.  At the same time the juvenile started standing up to the male, refusing to be driven off the mealworms, and generally carrying on as if it owned the territory, and eventually this has become the status quo.  Better than that, this juvenile will happily steal mealworms from right under the beaks of starlings and blackbirds alike, something I have never seen an adult do.  It (he?) has become tame enough to take food directly from my hand and is our constant companion when we are in the garden – so much so that we will be quite sorry if or when he does move on, but I wonder if that will actually happen.  There are signs that it is also beginning to moult and once that red breast appears there is very likely to be trouble if both he and the resident male are still in the territory.

Robin behaviour was described most accurately and with great insight in “The Life of the Robin”, by David Lack. First published in 1943 it has just been reprinted in paperback in June this year – my copy dates from 1965. Whatever the date, the detail changes little and for anyone wanting to know more about our national bird, it is the best possible source of information about the detailed mysteries of a bird’s life.