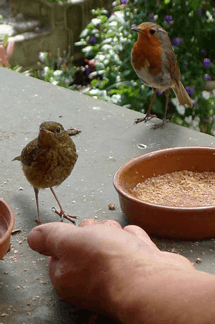 I suppose it would be safe to say that this summer hasn’t been the greatest on record and as a result the local breeding birds seem to have had a bit of a difficult season.  I have mentioned my tame robin family several times in this column – a succession of reasonably confiding birds has bred in or close to our garden for quite a number of years, and although the fully fledged youngsters are driven out of the territory by the adults as soon as they can fend for themselves, I am sure that once there is a vacancy in the territory some have returned.  After all, how would a newly arrived adult robin know to sit by our back door, patiently waiting for mealworms? However, we also have blackbirds that make good use of our offerings, and they feed their fledged young in the garden – this year only one or two at a time instead of a normal brood of four or five.

To my knowledge “our” robins have bred four times this year. In contrast to 2014, I didn’t find the nests this season as they have all been out of the garden.  So how do I know what they are at? Well, if you watch their behaviour carefully it is pretty obvious when they are nest-building, as they gather and carry off nesting materials. During this time the male will feed the female, both to reinforce the pair bond and also to ensure she is able to produce the eggs without losing to much condition. Later on one of the pair disappears for long periods amounting to days or even weeks (remember, robins look identical and can’t be sexed except in the hand). This is the female laying her eggs and incubating them. At the same time the male will be feeding her on the nest – a songbird carrying food is a guaranteed sign that breeding is going on. Eventually they both start gathering and carrying away food – this is when they eggs have hatched and a nest full of hungry chicks keeps them busy from dawn till dusk. Finally they appear in the garden with the fledged brood, or the survivors thereof at least.

Out of all these four nesting attempts they never arrived with more than three fledglings, and these numbers were reduced each time before the young dispersed.  The last brood arrived at the end of August, three gorgeous little speckled robins, which despite our shovelling mealworms out to them all day long, were soon reduced to two and then only one.  Probably the dismal weather was the root cause of this, and it brought home to me the true meaning of “supplementary feeding”.  Even when we are supplying excellent and abundant live food it doesn’t entirely replace what the birds must gather for themselves from the habitat; on which really depends the survival of the young.

Anyway our surviving young robin eventually became so tame that it would stand on our hands to take mealworms.  Then, we saw the warning signs – one of the adults started chasing it off the food and a few days later there was no sign of the youngster, only the adults undergoing a vigorous post-breeding moult and looking very tatty.

So ends another season – hopefully one or both the adults will survive the winter and breed near us next year, but that is by no means guaranteed of course.  If not maybe the tame youngster will fill the vacant space - one can but dream!  Anyway, I hope it will survive to grace someone else’s bird table and give them as much pleasure as it did us this summer.